Or as William Shakespeare wrote centuries ago:

To be, or not to be; that is the question;
Whether ’tis nobler in the mind to suffer
The slings and arrows of outrageous fortune,
Or to take arms against a sea of ​​troubles

I am a PL / SQL and Forms / Designer developer, with experience that goes back to the last century. The era in which you could only use the  telephone at home, or on the road in a telephone booth, if you had at least some guilders  with you …  The era in which  you used paper roadmaps in your car … The era in which internet was only available at the university … The era in which I played Duke Nukem 3D (https://www.wikiwand.com/nl/Duke_Nukem_3D) with 4 colleagues at the same time on a Friday afternoon on the Novell network, with pizza and coke of course… The age in which my hair was darker …

And from that time on I use Oracle. We built really big systems in PL / SQL with a front-end that was generated with good old Oracle Designer. In my career I have typed in miles and miles  of source code lines, typed them in again, put them in packages, removed them and put them in other packages. Logic moved from Oracle Forms to the database and sometimes back again.

Labour intensive …. Error-prone …. Unclear …. A lot of typing, blisters on my fingers …. Many recurring patterns. At the 3500th open-fetch-close cursor that I manually typed in, the world suddenly turned out to have changed ….

My phone knows where I am up to 1 foot, I can be reached anywhere, I am 24/7 on the internet. No guilders because the euro has been introduced in Europe, although I see little money because everything is now being paid electronically. My hair has mostly disappeared, and the hair that remains has 50 shades of grey. We now live in the cloud and we build applications without coding.

Almost 20 years into the new century I discovered OutSystems http://outsystems.com . A bit cautiously, because you are leaving  the Oracle database world. You can even build applications without an Oracle database! My eyes are  opening.

After a week of training I started working with OutSystems and wanted to share a few things with you. Just some things I have noticed, things that made me very happy.

I haven’t written an open-fetch-close so far … but I dragged an entity onto my canvas often, after which OutSystems writes the open-fetch I presume. OutSystems builds me  a maintenance screen for this entity. And if you decide to modify data types in the entity, add attributes or throw them away, add relationships, this propagates  automagically through the application you already built. No boring error-prone search-and-replace or refactoring.

The visual way of developing is really wonderful. You draw a flow, call some server actions  and you have built something… or actually: put something together. You have to code small chunks of logic, but that’s fun being an old code hacker. No  more miles of  code, with very boring fetches, from now on:  nice and clear!

If I decide to cut a function from a module and paste it into another module, nothing will be broken! Maybe OutSystems has a few questions for the human being operating the keyboard, but they are put neatly in a summary, with a proposal for improvement. A few clicks with the mouse, and we are up-and-running again.

And do you want to show it to the customer? No problem …. Icons that are linked with arrows, you can easily explain … 3000 lines PL/SQL code can be a big challenge .

I notice that I spend a lot more time with the customer and the business processes. I spend less time on the details of the code. There is a working application in no time. And yes, we have to start with Entities, CRUD server actions etc in OutSystems as well. But once you have jumped on the moving train, expanding or changing your application is very easy. This way you can focus on the fun part of the job.

Am I suddenly an Oracle renegade… or is it just the power that you can combine “the best of both worlds”. The latter, of course. There are many Oracle systems that an OutSystems application can collaborate with. Collaborate on the level of using the same data to the level of using software already built in Oracle. Oracle knowledge offers me the opportunity to properly determine what has to be built in OutSystems and what will stay in the good old Oracle database.

If you also want to explore the new low-code world, take a look at https://www.transfer-solutions.com/training-outsystems/ 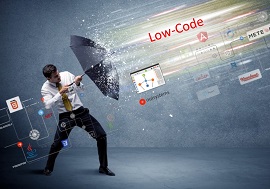