The most common backlash we hear about low-code from CIOs, IT Managers, and developers is, “It’s too good to be true… What’s the catch?”. At OutSystems, we were low-code before low-code was cool; in fact, we helped make it cool. And because we’re literally the “#1 low-code platform,” we’re familiar with all kinds of pushback and skepticism from IT professionals. So, let me give it to you straight: not everything you hear is true.

As the low-code market continues to expand and new vendors enter the fray, it’s understandable where the confusion comes from. After all, not all low-code platforms offer the same capabilities or address the same use cases.

In our recent annual event, NextStep, our CTO and CPO debunked the top 7 myths or misconceptions IT pros have about low-code and showed why a high-performance low-code platform is categorically different. Here’s what you need to know.

Too many assume that low-code platforms are just suited “for small stuff.” And they are not entirely wrong. Building a development platform capable of delivering complex applications while maximizing productivity is not easy.

What’s wrong with that assumption is assuming that all low-code platforms are equal. This misconception is one of the most significant differences between, let’s call it, regular low-code and high-performance low-code, like OutSystems.

High-performance low-code is designed from the ground up to supercharge the productivity needed to build strategic, mission-critical applications. It provides developers with the tools they need to deliver consistent, engaging omnichannel experiences, all in a single, unified environment powered by AI. No one has to leave the environment to complete an application unless they want to, and AI Mentors provide shortcuts and guidance that speed up development and ramp up productivity.

An example of the kind of applications I’m talking about is the complete terminal management systems that Vopak built with OutSystems that sits at the core of its operation. Another example is the complete customer experience Western Union is building for its banking application in record time.

There is a misconception that applications built with low-code do not scale when their user population, the volume of transactions, and data dramatically increase without affecting performance and user experience. Again, this is only true for some low-code platforms, not all.

With the OutSystems flagship platform, organizations can build applications that support millions of users without breaking a sweat–even on a busy Black Friday–and are sufficiently resilient to support core banking services such as real-time payments.

And with our new cloud-native delivery model, the OutSystems Developer Cloud (ODC), the scalability sky’s the limit. Applications built with our new cloud-native offer run in tenant-isolated stages, ensuring each of the apps auto-scale independently with segregated compute capacity, avoiding noisy neighbor interference. It includes a highly scalable, zero maintenance, low-downtime database. To learn more about OutSystems scalability and how it differs from regular low-code, check out our blog post about measuring low-code scalability.

Those who have been around the software development block a few times know that anything that claims to make development faster must cut all sorts of corners, right? Just look at the early adventures in cloud software hacks that happened when companies sacrificed security for speed.

At OutSystems, we take security very seriously. OutSystems is the only low-code platform that enables static code analysis, a valuable capability for the most strategic apps. This is due to the fact that it generates real, compiled code (i.e., it’s not interpreting code just in time) and offers embedded DevSecOps that employs over 250 different security checks from design time through to runtime.

And, in case of a vulnerability introduced by poor coding practices, OutSystems deploys AI to analyze code for security vulnerabilities, preventing unintended negative impacts. Learn more about it in our article Is Low-Code Secure?

We all know that technology is constantly evolving and that these change cycles are getting shorter. As a result, organizations end up stuck with stale, legacy technology that only piles on their technical debt.

At OutSystems, one of our core pillars is “build for the future” as one of our core pillars. In fact, we’ve even published a manifesto about it on our website. There are applications written 20 years ago using OutSystems that continue to run and evolve, despite many generations of new technologies, including mobile applications, microservices, cloud computing, and more.

This is possible because the architecture of OutSystems applications is independent of the underlying runtime and the specific technology stack, which allows us to change the runtime without impacting applications.

In most cases, this transition is instant and touchless. For the few that aren’t, you still transition at a fraction of the time and cost than it would take to do this on your own.

Many organizations see low-code as a solution that enables people with little-to-no training to develop applications. That’s because some no-code and low-code vendors focus on empowering citizen developers to create applications and don’t have a lot to offer professional developers. So, it’s no wonder that many pro devs believe that low-code isn’t for them. Fortunately, this isn’t true when you adopt a high-performance low-code platform like OutSystems.

OutSystems was designed to increase developer productivity while ensuring they have complete control over their code. So, while OutSystems wraps up and automates repetitive and boring tasks like dependency management and code validation, developers can focus on coding and delivering true innovation.

And they’re not limited to just what OutSystems provides out of the box. Developers can extend all platform layers by bringing their traditional code and integrating it into their low-code apps. Learn what low-code really means to a developer career in this blog post.

This myth is the result of an actual low-code truth: typical low-code architecture relies on interpreters and proprietary stacks, which makes it hard to extend, change, integrate, or understand.

What keeps the myth from being 100% true is the nature of the OutSystems platform, which was designed to play well with others. It integrates with existing enterprise development investments, supports strategic APIs, enables integration of traditional code, and benefits from the contributions of a large, vibrant developer community. You can learn more about OutSystems extensibility in this white paper.

In addition, if you want to unsubscribe from our platform (hopefully, that won’t happen), you can continue using existing data for existing applications, progressively migrate or integrate it from other applications, or just keep it for historical purposes. So, you’ll never be locked in.

#7 Low-Code Myth: Low-Code Is for Apps that Are Quickly Built and Forgotten

Many no-code and low-code platforms fulfill the need for simple tactical apps that don’t change much like vacation tracking and automating data entry for a spreadsheet. But when you’re building something strategic, like a mobile app for consumers, it needs to evolve with your business and continuously be adapted.

In fact, Google’s DORA program defines high-performing developer organizations as those capable of publishing updates to production on demand, multiple times per day. This is extremely difficult. However, thanks to embedded DevSecOps and automation capabilities, many OutSystems customers can achieve this level of productivity today. You can read more about it in this blog post.

And, with ODC, we intend to make it possible for any organization to be a DevOps high performer. ODC follows a build once, deploy everywhere philosophy, which results in much faster deployments that can be done in parallel as there isn’t compilation time on each stage. This way, large portfolios take seconds to promote between stages. This approach also ensures that what’s in production is the same that was tested, which is critical in high compliance environments.

Ready to Give High-Performance Low-Code a Try?

So, that’s seven myths done and dusted. Low-code gets a bad rap, and it’s totally undeserved. Especially when it comes to a high-performance low-code platform like OutSystems.

With OutSystems, you can build enterprise-grade, strategic applications that are delightful, that take the best advantage of the full breadth of your team’s talents, and that break through the walls of legacy approaches. You can build apps that function like living organisms, adapting and evolving to your business demands and the latest technology stack.

That’s what OutSystems is. And we are the only independent market player focused exclusively on innovation around high-performance low-code.

If you want to explore more about OutSystems, I invite you to take a look at the available demos on-demand, or, for a more personalized experience, we can provide a demo. For the developers out there, you can also take OutSystems for a test drive with our free edition.

Since she first used a green screen centuries ago, Forsyth has been fascinated by computers, IT, programming, and developers. In her current role in product marketing, she gets to spread the word about the amazing, cutting-edge teams and innovations behind the OutSystems platform.

See All Posts From this author 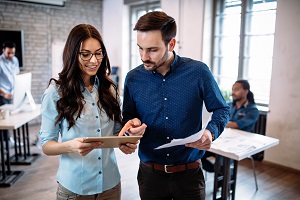